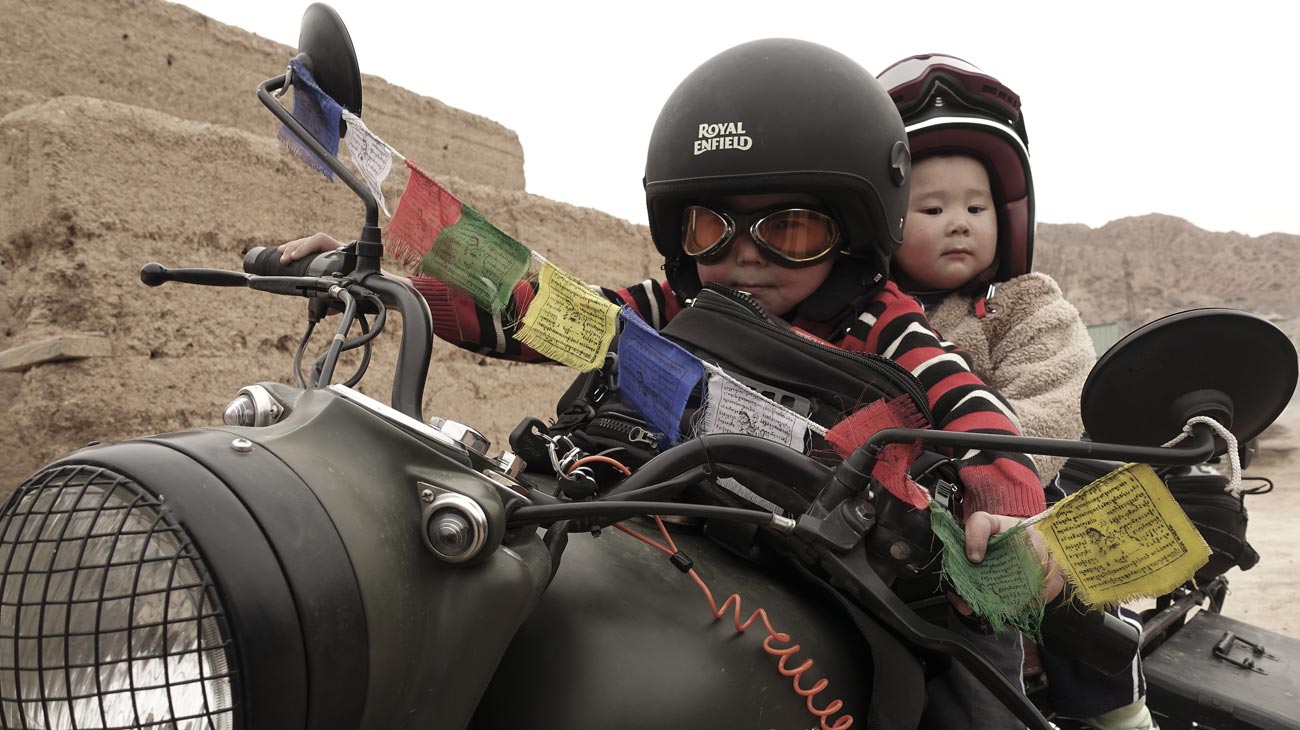 Sylvain and Mathieu are two French sound engineers who buy a couple of Royal Enfield Bullets in India and resolve to ride back to La France. Along the way they punctuate their journey by dropping in at community centres, jam sessions and schools to record the local soundtrack as they go.

The result is an example of where the wind is blowing in adventure travel film-making. Twenty years ago if you simply drove 15,000 km from one side of a continent to another, and shot some stuff, that was enough. However, nowadays your film will need more than just ‘you’ and ‘travelling’ to stand out from the gap-year Go-Pro crowd. A movie with a theme, a purpose and a heart of gold. C’est magnifique!

Hello, not long now till this summer’s Adventure Travel Film Festival. We are so excited to be sharing so many fantastic films this year. Lets start with a quick summary of yours, what’s it about?

We are two modern-day French explorers, musicians and filmmakers who set out to follow the ancient silk route from India all the way back to France, riding the whole way on old classic motorcycles with recording gear in tow.

We already rode all around India for a year. There was no remedy for the “travel virus” which infected us and the road trip fever kept its ascent. Both full of ambition and addicted to adrenaline, we also shared together our childhood and the love for music which is one of the main guidelines of this journey.

A Musical Journey on the Silk Route is the first project of the Association India On Bullet, founded by both of us.

All along our journey, we have been highlighting musical and social projects happening across 17 countries. Institute after institute, microphones and cameras in our hands, we have been recording and filming disadvantaged children singing traditional songs from their native countries.

How did the film come about? Was it something that you’ve always been interested in?

Basically we have never expected to do a film. After a year traveling around India we have decided to ride back to France and to record this album. The album was the aim of that project. Two month before to start the trip toward the West, we have met this lady, TV Broadcast distributor who loved our project and gave us a kick to film as much as we can on the journey.

Once back to France she called us back and gave us a second kick to edit the film. We didn’t really have experience in film making, but let’s say that with the adrenaline, we did it !

This years films have spanned oceans mountains, glaciers… a huge range of environments. What challenges did you face in making yours?

Regarding making a film while traveling, the biggest challenge is to take the camera at the right moment (which can be often), even when you don’t feel like because you’re tired, of because it’s snowing. Usually the worst moment to shoot are the best moment to have on a film.

I remember that day in Kyrgyzstan, we were riding a 3500 meter high pass, under the snow. It was f**** cold ! With altitude there was less oxygen and our bikes were struggling. We had to arrive before the night to the place we’ve planned to sleep, we had our finger cold like an ice-cream, but we knew that we had to take the camera and film what we were doing at that moment.

We have lots of people come to the festival who aspire to future film makers. Do you have any advice?

In that kind of « cinema » there is no need of experience. What’s important is the content. With time and after some hours shooting, you’ll get the way to use the camera, different plans, and make something more artistic if you feel like. For us, the most important in to share our experience the closest possible to what we experienced, and to not think to much about the artistic point, sometime it gives less honesty in the story…

Are you coming to this years festival? How can audiences find out more and connect with you?

I’ll be on the festival yes. Unfortunately, Mathieu won’t be available on this week-end.

You can read and see more about the project on :

Thanks, we can’t wait to share the films this year!

Alone Through Iran – 1144 Miles of Trust

Dirtbag: The Legend of Fred Beckey

The British Backpacker Society: Across the Sahara

Oxford to Sydney in a KR2

MOHON – Adventure on a bike

From Morocco with Love

I love to take You Away With Me

The Road To Independence

Some of these cookies are essential, while others help us to improve your experience by providing insights into how the site is being used. For more detailed information, please check our privacy policy.